ACCS is organized to promote, establish, and equip member schools that are committed to a classical approach in the light of a Christian worldview.

We believe in God the Father Almighty, Maker of heaven and earth; and in Jesus Christ His only Son, our Lord. Jesus Christ was conceived by the Holy Spirit, and was born of a virgin, Mary. He suffered under Pontius Pilate, was crucified, died, and was buried. He descended into Hades, and on the third day He rose again from the dead. He ascended into Heaven, where He sits at the right hand of God the Father Almighty. From Heaven He shall come to earth again to judge the living and the dead. We believe in the Holy Spirit, one holy catholic church, the communion of all true saints, the forgiveness of sins, the resurrection of the body, and the gift of everlasting life. (Apostle’s Creed) 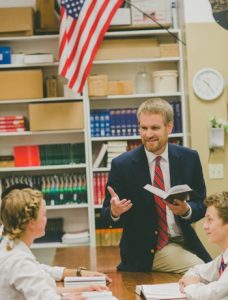 Our schools operate as an extension of the family, under the authority of fathers who are required to raise their children in the fear and admonition of the Lord (Deuteronomy 6 and Ephesians 6).  Some of our schools operate under the authority structure of a church, and therefore these schools have extended authority in the area of family and community.  The authority granted to fathers and mothers in Scripture is passed to the school in loco parentis.  This means that, for the development of paideia in students while at school, the school operates with the same authority that fathers have in the raising of children.  Our position on authority influences our view of Government and its role in education.

We expect that many schools will have more particular practices and policies regarding faith.  Those listed here should be considered minimum standards.