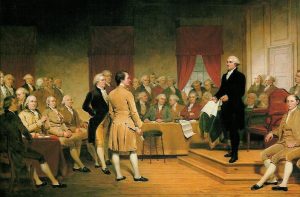 At the time of America’s founding, classical Christian education was the only form of education practiced in the West.  The quality of leaders this system of education has produced throughout history is impressive.

“At the time this nation was formed, our population stood at around 3 million. And we produced out of that 3 million people perhaps six leaders of world class — Washington, Adams, Jefferson, Franklin, Madison, and Hamilton. Today, our population stands at 245 million, so we might expect at least 80 times as many world-class leaders — 480 Jeffersons, Madisons, Adams, Washingtons, Hamiltons, and Franklins. Where are they?” [John Gardner—American author and Medieval historian, “On Leadership”]

Why was this form so effective?  Classical education began with the Greeks around 400 BC. Aristotle was one of the first teachers, using the trivium and the quadrivium to teach the sons of Greek aristocrats to have virtue and an independence of mind.  Fortitude, Justice, Prudence, and Temperance were among the traits that Aristotle’s educational model sought to cultivate in leaders.  The ancients understood that ‘we’ are a product of what virtues we love, deep down inside.

By the time of Christ, various Greek sects attempted to imitate the nature of the divine. In this context, Paul preached the one true God to the Greeks in Acts 17. Greeks referred to this concept of a perfect divine essence as the “Logos”, translated “word” in English.  In John 1, we see the clear connection between the Greek concept of the Logos and Jesus Christ. This is one of many times in the New Testament that we see the ideas from the school at Athens connected to Christ. In the first and second century, early church fathers like Justin Martyr, Origin, and Clement of Alexandria wrote on the connection between the classical schools and Christianity.

At the first Nicene council in 325 AD,the church fathers had a long tradition of classical Christian education. Ambrose of Milan, Augustine of Hippo, Athanasius of Alexandria and Jerome were all church fathers with classical educations who expressed the doctrines that nearly all Christians believe today. By the middle ages, classical Christian education was a keystone in how the church taught its people about God, so they could worship him in spirit and truth.

For two millennia, classical Christian education quietly and instrumentally laid the foundations for Christian culture and the West.

Almost 300 years ago, this form of teaching in homes, in churches, and in schools trained up leaders who abolished slavery, challenged tyranny, built a new form of government, and awakened millions to the truth of Jesus Christ in the first and second great awakening. Lives, as a whole, were marked by a universal acceptance of God as the creator and sustainer of our universe. Then, in a single century, that all changed.

Back to Our History