Recognizing a public figure who has stood faithfully for Christian truth, beauty, and goodness with grace.

ABOUT
the award
WATCH
the story
RECIPIENTS
complete list

About the St. Boniface Award

Each year, the ACCS recognizes the actions of a Christian leader who steps forward and stands faithfully for Christian truth, goodness, or beauty against the prevailing pressure of our culture.

Like St. Boniface, recipients chose to publicly speak or act on a matter that could cost them personally.   The award is presented at our annual ACCS conference, Repairing the Ruins, in June of each year.

To be nominated, the recipient will have, on one or more specific occasions, taken a stand for the Christian viewpoint, even in the face of negative public opinion.

And, the recipient engaged in this action without bitterness and in a godly and grace-filled way.

The award is presented with a gift and a commissioned bronze statue of St. Boniface, sized for display in a home or office.

We hope that this recognition will help Christendom appreciate the truth that lies within the Gospel, even when the spirit of this age rejects it. 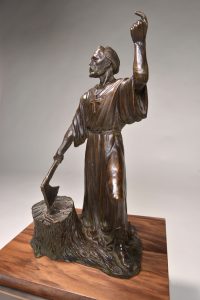 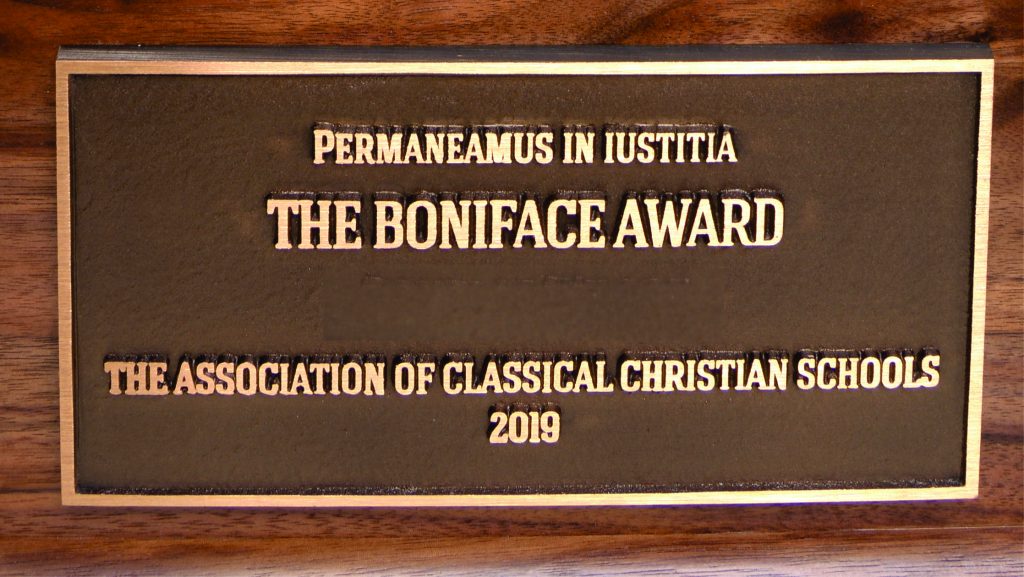 St. Boniface was an 8th-century Christian missionary to the pagan German people who cut a sacred oak tree dedicated to a pagan god near the town of Fritzlar, Germany.

As he began to cut, some say a great wind blew the tree down as locals looked on.  They expected the act to bring certain calamity on Boniface, who was unharmed.

Seeing this, the town was converted. This legendary bravery made Boniface a singular character willing to stand alone to root out paganism from the culture.  Boniface went on to preside over all of the missionary territories in Germany east of the Rhine river.  His work is memorialized in Germany to this day. 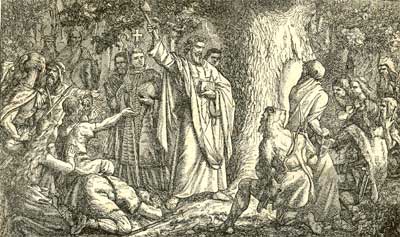 Dr. Voddie T. Baucham, Jr. is a husband, father, former pastor, author, professor, conference speaker, and church planter. He currently serves as Dean of Theology at African Christian University in Lusaka, Zambia. Voddie makes the Bible clear and demonstrates the relevance of God’s word to everyday life. However, he does so without compromising the centrality of Christ and the gospel. Those who hear him preach find themselves both challenged and encouraged.

Voddie and his wife, Bridget, have been married since 1989 and have nine children.

Give praise to the Lord, proclaim his name; make known among the nations what he has done.
~ 1 Chronicles 16:8

By Ty Fischer, ACCS Board Director of Strategic Growth
For The Classical Difference

“This book is a must-read for all Christians…” — Louis Markos, Ph.D., ACCS conference speaker, and professor of English and scholar in residence at Houston Baptist University

Learn more at ChristianBook and Amazon.

Michael P. Farris is president and CEO of Alliance Defending Freedom. This award was presented to Farris in light of his continual sacrifices and tireless efforts to stand for freedom and religious liberty as an author, speaker, educator, and lawyer. Farris was founding president of both the Home School Legal Defense Association (HSLDA – 1983) and Patrick Henry College (PHC – 2000) and continues to serve both. He has argued before the appellate courts of 13 states, eight federal circuit courts of appeal, and the U.S. Supreme Court, and has testified many times before both the House and Senate. He and his wife, Vickie, have 10 children and many grandchildren.

If we want to preserve our liberty, it is up to us to know what is going on, to know the Constitution, to know these limitations on the power of Congress and to insist that our leaders obey. –Michael Farris

Rosaria Butterfield is the author of The Secret Thoughts of an Unlikely Convert, which tells the story, with outspoken honesty and unwavering love, of her transformation from the LGBT lifestyle. She boldly speaks truth, but with hospitality and grace. This award was presented in light of the tremendous sacrifices she has made in her career and personal life to continue telling her story and spreading the Gospel. Her other books include Openness Unhindered: Further Thoughts of an Unlikely Convert on Sexual Identity and Union with Christ and The Gospel Comes with a House Key. Rosaria writes about sexuality, identity, Christian hospitality and community, and seeks to encourage all in faithful Christian living and service. She is married to Kent Butterfield, pastor of the First Reformed Presbyterian Church of Durham, where she home-schools their four children.

The inaugural award was given in light of Wilson’s regular challenges in the media, in books, from the pulpit, and online to the liberalization of the church and his faithful work in founding organizations that bring light, rather than simply curse the darkness.  In addition to his founding work with the ACCS, he helped found Logos School in Moscow, ID, Greyfriars seminary, New Saint Andrews College, the Communion of Reformed Evangelical Churches, Canon Press, and Christ Church, Moscow.  Wilson was not involved in the creation or selection of this award.