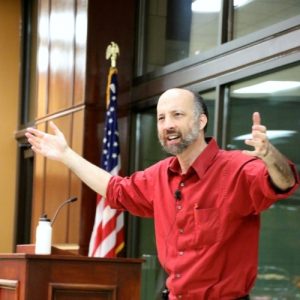 Has it ever struck you as odd, or unfortunate, that to-day, when the proportion of literacy . . . is higher than it has ever been, people should have become susceptible to the influence of advertisement and mass-propaganda to an extent hitherto unheard-of and unimagined? Do you put this down to the mere mechanical fact that the press and the radio and so on have made propaganda much easier to distribute over a wide area? Or do you sometimes have an uneasy suspicion that the product of modern educational methods is less good than he or she might be at disentangling fact from opinion and the proven from the plausible?

From where do you think I have plucked this incisive critique? From a politician or pundit exposing the ills of our primary and secondary education systems? From a public watchdog group warning against the dangers of consumerism? From a professor of writing or of logic bemoaning the lack of preparedness of the modern college freshman?

No on all counts. The critique was written over seventy years ago by a British scholar, translator, apologist, dramatist, detective writer, and public intellectual named Dorothy Sayers. It appears in an essay titled “The Lost Tools of Learning” that Sayers first read in Oxford in 1947 and then published a year later. In her essay, she calls for exactly the kind of education championed by the ACCS, a time-tested liberal arts method of instruction that frees the mind from what Francis Bacon called the “idols of the marketplace” and that arms it against faulty logic, emotional appeals, and manipulative propaganda.

Sadly, Sayers’ critique is even truer today than when it was written. In America, we applaud ourselves for having a highly educated populace, while overlooking a disturbing reality—our increasingly educated populace has become increasingly less able to distinguish evidence from hearsay, logical argument from personal attack, reasoned discourse from political spin. High school (and increasingly college!) graduates too often leave their alma maters in possession of much specialized knowledge, but without the ability to weigh, analyze, and assess the endless stream of new “knowledge” that comes to them through their television screens and smart phones.

Though many of them will have gotten, piecemeal, some of the benefits of the grammar stage of the medieval trivium, most will not have gained the benefits of the logic and rhetoric phases. That is to say, they may have memorized some of the major dates and events of history, but they will not have been trained to put those events into a coherent framework, to think logically about the moral and philosophical issues raised by them, or to articulate and defend the lessons they should have taught us.

A classical education offers the best armor plating I know against the barrage of information that assaults our young people on a daily basis. It teaches them how to sift evidence, gauge the reliability of sources, uncover the presuppositions upon which arguments rest, and discern the consequences those arguments will have. And it emboldens them to insist that politicians, advertisers, and media experts define their terms carefully, back up their claims with objective, non-skewed evidence, and avoid such common logical fallacies as circular reasoning, ad hominem attacks, and syllogisms with undistributed middles.

When Sayers wrote her essay, she knew that her opinions would not sit well with most academic bodies. But that was not her concern. All she was concerned with was “the proper training of the mind to encounter and deal with the formidable mass of undigested problems presented to it by the modern world.” I am glad to say that the ACCS shares her concern . . . and has done something about it.

Louis Markos, Ph.D., Professor in English and Scholar in Residence at Houston Baptist University, holds the Robert H. Ray Chair in Humanities. The author of 20 books, including The Myth Made Fact: Reading Greek and Roman Mythology through Christian Eyes and From Achilles to Christ: Why Christians Should Read the Pagan Classics, he speaks widely for classical Christian and classical charter schools and conferences. His son teaches Latin at Geneva classical Christian school in Boerne, TX, and his daughter teaches music at Founders classical charter school in Lewisville, TX.