What is Ad Fontes?

Ad fontes means “to the sources” in Latin. Rather than reading textbooks or commentaries or listening to lectures, it means reading original sources as much as is possible.

Scholarly study in the late middle ages was limited to a relatively small collection of hand-copied manuscripts, so scholars relied heavily on the testimony of others and, over time, started to lose touch with the originals. During the Renaissance period (14th century – 17th century), original texts began to resurface in large numbers. These ancient authors prompted the recovery of classical ideas. And scholars realized just how important original sources and documents were. This is why Renaissance humanists (not the same as secular humanists) began to focus on original sources — in the original languages. Most importantly, they studied the Bible in Greek and Hebrew instead of the traditional Latin, which played an important role in the Reformation. They looked back to the sources, the fountains from which ideas first bubbled up, hence the term “ad fontes.” 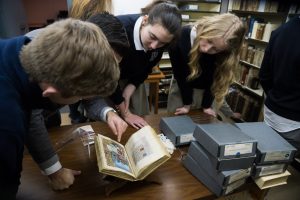 Why read the original text when we have summaries and commentaries? The better question is, “Why not?” Students, especially in subjects like history, philosophy, and literature, should not rely on others’ reports or summaries when original sources are available. To uphold this foundational tenet of classical Christian education — teaching kids how to think, not what to think — textbooks and commentaries must be relegated to the tools they are. No system of education can teach kids how to think while relying on textbooks, commentaries, and lectures.

In this spirit, many classical schools teach Latin, Greek, and sometimes Hebrew in order to facilitate reading documents in these languages. When this is not possible, classical schools use good unabridged translations of primary and secondary sources. This is why classical schools discourage reading only excerpts, summaries, or modern references when they could be looking to the classic ancient sources themselves.

No one puts it better than C.S. Lewis, who said:

I have found as a tutor in English Literature that if the average student wants to find out something about Platonism, the very last thing he thinks of doing is to take a translation of Plato off the library shelf and read the Symposium. He would rather read some dreary modern book ten times as long, all about ‘isms’ and influences and only once in twelve pages telling him what Plato actually said. … The student is half afraid to meet one of the great philosophers face to face. He feels himself inadequate and thinks he will not understand him. But if he only knew, the great man, just because of his greatness, is much more intelligible than his modern commentator.C.S. Lewis