What is the Socratic Method??

In the Socratic method, also known by the Greek word “elenchus,” students discuss a question under the guidance of a teacher in order to come to a factual and faithful conclusion. In a Socratic discussion, students must argue their points well, think through the logical implication of every proposition, and precisely understand each word’s definition. It teaches students to critique others’ arguments respectfully, and gracefully accept the critique of others.

This method comes from Socrates as portrayed by Plato in his dialogues. It is said that an oracle declared Socrates to be the wisest man alive, simply because he understood how little he actually knew: “So I appear to be wiser…in just this one small respect: that when I don’t know things, I don’t think that I do either.” 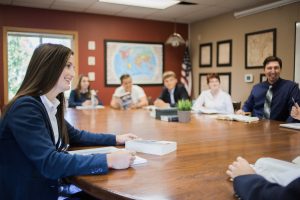 Socrates is famous for his question-and-answer dialogues in which he proved to his fellow Greeks how little they actually knew, and how many of their beliefs were inconsistent. In his Euthyphro dialogue, for example, Euthyphro begins by claiming that “piety” is dictated by the gods. But through his questions, Socrates reveals that Euthyphro also believes the gods have differing opinions about what piety is, which means they can’t set the ultimate standard for piety.

Socrates’ question and answer debates allow for no inconsistencies, no ambiguity, no twisting of facts. Using these principles, classical schools strive to train students to think, speak, discuss, and interact with others — and identify their own and others’ fallacies.

A Socratic discussion in the classroom is facilitated and led by the teacher. It is good for students to sharpen each other by proposing counterarguments, seeking clarity, identifying holes in logic, and redirecting conversation when it drifts off track. However, the teacher’s guidance is also needed to direct the discussion in productive ways.

In contrast, “Harkness” style discussion is completely student-led with the goal that students discover what they themselves think. The goal of Socratic discussion is truth. And the discussion can go deeper towards truth when a teacher facilitates. Playing the role of Socrates, the teacher comes to the discussion having more experience than the students and so can ask the right questions and bring up the most relevant points.

In his own time Socrates stood in contrast to the Sophists — rhetoricians who used their skill to debunk others’ ideas for the purpose of political or personal gain, without concern for the truth. Today, this Sophistry is as dangerous as ever, and students must be trained away from it, especially so they can learn to see through it. 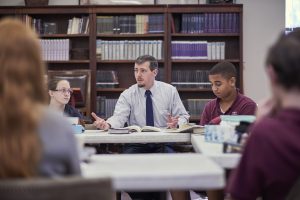 A Socratic discussion could be about anything, from current events to literature, to questions of morality, to historical analysis and application. It is primarily practiced in grades 7-12, but may start as soon as 5th. Generally, students read a text, the teacher proposes a question, and students use statements in the text to support and refute.This requires careful and accurate reading of the material. A simple example would be, “Should this character have done what he did?” If it’s the right question, it requires consideration of both the text, to find out the details about the character’s actions and motives, and the Bible, to provide the standard. Alternatively, students could ask whether the author thinks a character should have done what he did. Debate-style questions could also be introduced, requiring students to do research ahead of time about things like current events. Then, students would use principles from their coursework to further discussion.

Classroom structures for discussions depend on the situation. Many schools intentionally schedule smaller “seminar” classes, and provide a table for students and teachers to sit around in these classrooms, rather than desks. In this case, Socratic discussion can happen throughout the natural course of the day when a topic or question arises to prompt it. Raising hands can be done away with altogether for older, more experienced students.